After inheriting her estranged father’s coffee shop following his death, Catarina Koshka returns to her hometown to try to find closure. In this somber but heartwarming visual novel, players will make coffee, meet cute animal characters, and navigate the encroaching advances of a predatory corporation bent on buying out your neighborhood shop.

Great game but too short :(

lol get a life

A bittersweet ending. I enjoyed this little game <3

That was sweet and sad

This was sweet and really fun. I liked serving the regulars.

Thank you for these thoughtful vibes. I miss being able to hang out in a coffee shop and just listen. If you keep on working on this, I would love more ambient sound effects! I also echo the comment that more player choice would be worth considering as well.

Can we get an exe?

A wonderful game that I intially set out to do a video on however due to the stories succinct nature I don't want to spoil even a single moment. Savour it like you would savour a hot coffee on a cold winter morning.

A sweet short fun coffee game with nice art. A little hamfisted with the plot, but it's good for what it is: a story about moving on, things changing, and leaving the past in the past.

A short and sweet game! Art style is adorable, the puns sprinkled in are also very cute.

(the opposite of my coffee)

The mark of an enjoyable experience—my disappointment when it ended so soon. I loved the art and the character design, and the music in the background.

And loss is hard to deal with, that process looks so different for everyone. Lost my mom when I was 8, I'm 24 now lost most of my family and it's still hard.

love me a good game about gentrification

I enjoyed what I played of this, but could you please make it downloadable with save support? It's not always easy to play a whole game in one sitting... Thank you!

Cute. A bit dogmatic with the whole corporate takeover thing, it was very on the nose. I hate starbucks, but it was just too silly to take seriously. I think more days and a bit more dialog would have worked better and no new art would have been needed. I was proud of myself for remembering all of the orders and then it ended up being pretty short.

Eh, after thinking about it, I think it was appropriate for how short it was. It was a simple note about the acceptance of events. I liked it a lot.

I loved the art style and the mood of the game! it was a thoroughly enjoyable experience. I have to agree with the other commenters that the story lacks pace and choice. I really wanted to deny the change to Starducks and it hurt to disappoint the regulars. I understand that as a whole that might be where you wanted the story to go but it felt like cutting off a valid choice for the player to craft their own experience. For the pacing i would have loved more days, but i understand the workload to make such a lovely game might have required you to not fully flesh out every option possible. My only big gripe is that when the game starts i would have enjoyed an arrow pointing out the tutorial sign. I managed to intuitively know how to make coffee and missed it till the change to Starducks. Thank you for making such a lovely game!

I love this game. It was a touching story, not only about loss but also about love. I found the mini game very soothing and the music and the art style beautiful. A poignant experience !

I completely agree with other comments, this game was lovely and touching, I only wish it could've been a little longer.

This game is so sweet and so sad. I enjoyed the music and the narrative and the art style.  I look forward to other games by the creators if they ever decide to make them!

Short and enjoyable. So bittersweet as it's about inheriting a shop from a father that was never really present. While it could have been a few days longer in order to make the change from family-owned to corporate affiliate more impactful, I adored what I got to see.

The coffee making minigame was very enjoyable. It really had a quaint, soothing feel. I liked how the some customers would ask for their usual. There were sometimes graphical glitches on the coffee-making screen, where if I dragged a sauce or the milk pitcher onto something and then clicked too fast, the image would get stuck there.

and navigate the encroaching advances of a predatory corporation bent on buying out your neighborhood shop.

I don't think this is true about the story, though. You don't navigate anything: the someone shows up to add your store to Starducks (Starbucks) and then the next scene your character has accepted it and the coffee-making minigame has been reskinned. I think this is a fault of the story's pacing-- you only have two days of coffee-making before the change, so you don't get too attached, and when the change happens it's not really meaningful to you as a player, even though it clearly has meaning for the NPCs.

Also, the story is about Catarina navigating a shop belonging to her deceased father that she wasn't fond of and finding closure in that he really did care about her, but it's way too short and surface level to make a real emotional impact.  The customers are the ones who make the most of the story and show how her father made an impact on them, but Catarina has very little reaction to what they say. She barely reflects on what the customers say or what they mean to her, and there's no other scenes that explore Catarina's emotions or her relationship with her dad, and so the ending where she finds a photo and recipe he left her feels emotionally flat. She says she found closure-- but that closure barely connects to the rest of the game's story, so it's hard to see how the story pieces fit together to get her to that conclusion. She starts off cynical and angry at her father and her situation, and it's not clear why she changes her mind about either by the end.

Overall, I think the story could have been written more tightly, but the minigame was fun.  It almost feels like the minigame was supposed to be part of a larger game (since it doesn't seem to matter how well you do at it) and the story we got was incomplete.

That was such a touching story! I really wish I could have taken made a difference to the ending.

Also, as a former barista, it was a lot of fun getting to take orders again. <3

This game is so beautiful, it really brought a few tears to my eyes. Plus, I love any game that allows me to make a cup of coffee <3

That was such a lovely game awww.

Wish this was longer! Very enjoyable, albeit short, experience; even with a very, very limited knowledge of coffee brewing.

Very nice and poignant, I'd love to see these themes explored further and expanded with this premise!

This was a lovely game, it kind of wanted me to continue on with the coffee making and to see how further Cat's life would turn out, along with the visitors.

Beautiful game. Loved the art, the story, and just how heartfelt the ending was. keep up the good work!! <3

i definitely teared up at the end there, wow. Loved the story, loved the characters, loved the language!

gorgeous game!! the anthropomorphised characters threw me off for a second but the art and music are so gorgeous. I got this in the Racial Justice bundle thanks for adding it. solidarity forever!

Nice little game, the art is very cute.  Would love to see it expanded. 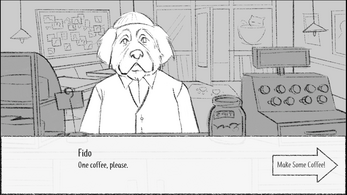 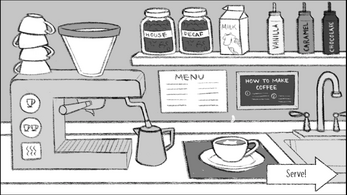 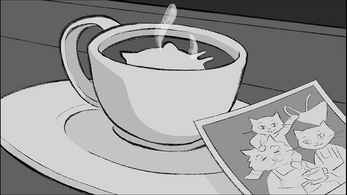 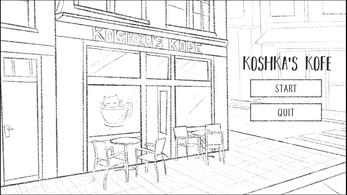